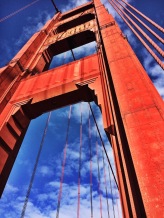 I’m en route to San Francisco with just enough connection time in Munich for a cold lager and doughy pretzel.  The 11-hour leg into the magic kingdom will be long enough for a gourmet airline meal and glass of plunk wine, a couple of movies, and some typing on this first report. Perfect.

My last collection of dispatches was offered up just about one year ago. I was struck by the changes both good and bad resulting from the ongoing tech invasion, voyaged up to the wine country for a proper braising in hot, stinky mud, and went on safari for the perfect cheesecake. (That would be Zanze’s by the way, mission completed.)

What’s the plan for this trip? Well, aside from some music recording later in the week I’m keeping the expectations open and hopeful, which is how one should always approach San Francisco, this magical City by the Bay. Onward!

Dispatch #1 – All Colors of the Rainbow

I’m flying solo on this voyage so have accepted my ex’s invite to stay at the old homestead. It’s become quite the colorful residence, with ages ranging from 18 to 84, dinner debates in 3 languages, a grandma from Spain (no inglés, lo siento), our 3 French/American kids, one new boyfriend and a transgender girlfriend (both are second generation immigrants also fluent in Spanish, so that works for grandma!), and now Bill-the-former-husband sofa surfing for a week.

How my ex manages to manage this ever-entertaining circus while holding down a full time job, caring for her mother, helping with college apps, keeping the house from falling apart, and putting a dinner on the table every evening is a mystery to me.  It takes real perseverance, acceptance, a love of all things diverse, and a big heart, … and this is what makes it a truly San Francisco household. 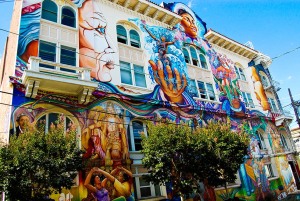 This is a city of incredible diversity: ethnic, sexual, economic, and even meteorological (50s at the foggy beach, 80s in Dolores Park). It’s not a town for the intolerant or neophobic. If you’re uncomfortable with change or being around people of different shades, accents, or orientations of any fashion, best to avoid signing a long-term lease.

Perseverance and ambition have been the hallmarks of each wave of migrants who’ve managed to secure a foothold: the gold miners and railroaders, the Chinese and Italians and Irish and Mexicans, the gay community, the techies. You don’t come to San Francisco for a life of leisure by the sea. It’s a city of creative sweat and big energy, … and the possibilities of beautiful reward.

So here I am and being blessed with sunny blue skies. My walk this morning along West Portal Avenue for a coffee at Peet’s – a few days of adjustment will be needed for the American caffeine dosage – has left me sweating in my light pullover. It’s only 9 a.m. but I’m already thinking through neighborhood options for lunch: tacos, pasta, sushi, burgers, pizza, dim sum …. the options are endless, kinda like this town. Appetite peaked, let’s go!

Dispatch #2 – Strike Up the Band

It is an interesting twist that we immigrants to this garden paradise are proposing border walls to keep out its former owners. Mexicans were roaming these Pacific lands long before the gringos arrived in ships from Spain and wagons across the Sierras. Since then they have been driven out, then invited back to work the fruit and vegetable farms during WWI, bussed back out during the Depression, then begged back to the fields during WWII, and on and on. They are a resilient group, and despite current presidential claims to the contrary continue to play a vital, essential role in the economy and social color here in the magic kingdom.

Mariachi music is distinctly Mexican. It is a festive mix of strumming guitars, brassy trumpets, sweeping violins, and nostalgic lyrics about life and love south of the border. These ensembles come large and small.  Bands of 10 or more in splendid mariachi regalia play weddings and parties, and small combos of 3 or 4 in their nicked up cowboy boots and hats wander the Mission District streets, popping into bars and restaurants for an hour of entertainment and tips before moving on.

La Rondalla was a special kind of restaurant cantina in the Mission that I frequented in my rowdier years. It had a long and dark serpentine bar, Christmas lights shaped like tiny chillies blinking year around, generous bartenders known to break into Spanish song, a crazy fun mix of patrons – from the local hispanics to city hipsters, gays and lesbians of every persuasion, punkers and college kids and anyone else out for an unpredictable night – and great mariachi music. There was a large house band and no stage. They would show up mid-evening, stand at one end of the bar and rip out song after song while the locals sang along with lyrics that most of us didn’t understand. It was a family ensemble, with dad leading up the group and his young sons and nephews and friends, some barely into double digits, playing along and learning the craft. Great energy, great fun. 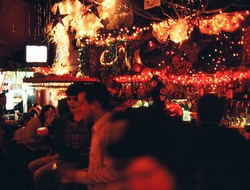 I had more than a few interesting evenings at La Rondalla. One involved a close and charming friend that moved me to write Paralyzed, which is one of 14 songs being recorded now for my upcoming album. It begged for a festive arrangement, and so last year I sought out the best mariachi band in San Francisco to help adapt and play it. Nueva Generacion was the obvious choice, particularly after learning that its young leader Eduardo Garcia was one of those kids playing weekly at La Rondalla so many moons ago, most likely on the night that Paralyzed was inspired.

Life never ceases to amaze. It leads us across the paths of people from different tribes and ages, with different histories and hopes, and we make biased assumptions about them that only serve to disserve. I have to constantly remind myself: stop this! Not in my wildest imagination would I imagine that this young Mexican kid I used to watch playing violin in La Randalla would be collaborating with me on music so many years later. Thank you Eduardo! Just more magic in the magic kingdom.