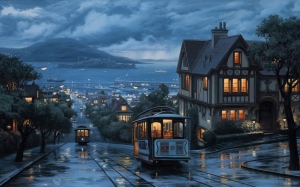 Again I descend from the clouds over San Francisco for a 10-day visit to this kingdom of magic. It’s an interesting time to take the pulse and gauge the temper of America from a very unconventional American assemblage. And few cities are more interesting to write about than Bagdad by the Bay.

February can be an unpredictable time to visit and indeed the rains this winter  have been biblical. Reservoirs are flooding, dams are bursting, avalanches are sliding, and all the anxiety over drought concerns seems suddenly quaint, … for the moment.

But Provence weather has followed our flight all the way from Marseille and our first 2 days in country have been sunny and warm. Not quite tee shirt weather yet, but the umbrellas and raincoats are safely tucked away. Fingers crossed for the rest of the stay. Onward!

Dispatch #1 – Something in the Air

The veneer of life in San Francisco is largely unchanged from my trip here last fall. It remains a city of hyper-active super achievers. You can’t swing a cat without hitting a jogger. Lululemons remain le vigueur for Saturday morning café garb (a yoga matt over your bony shoulder earns extra points). The dinner talk we overhear at a communal Nopa table centers on innovation and investors and the fortunes possible if stars align before the bubble bursts. (Great meal by the way.) 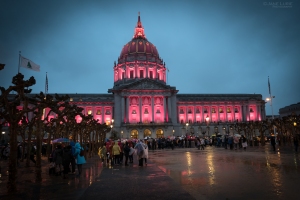 Despite the indefatigable positivity that defines this kingdom a destabilizing uneasiness is seeping in below the surface. Trump is not popular here. Signs of resistance are evident in the windows and walls of businesses and homes scattered across the city: Not our President! and Why I Marched and Make America Love Again are just a few examples of the sentiments expressed boldly and widely across this 49 square miles. The new president is an unapologetic technophobe and his economic policies introduce uncertainty into no industry more than Tech, with his promises of lower taxes on repatriated profits (very good) to higher tarifs on Chinese imports and harder limits on immigrant visas (very bad).  74% of Silicon Valley-employed computer and mathematical workers ages 25 to 44 are foreign-born, according to the 2016 Silicon Valley Index.

While the Bay Area still remains The Big Show to brilliant innovators and startup dreamers across the globe, it’s eminence is under attack by other, smaller centers of innovation. America is closing its borders to the best and brightest, and other countries stand to gain. In just one example, the new French Tech Ticket Program awards each year 70 foreign startups (no, they CANNOT be from France) financial support (a 50,000€ grant for starters), free incubator space, and active mentoring for moving their budding operations to the land of great wine and cheese. One of these countries is closing its borders despite no real history of immigrant driven domestic violence. The other is opening up, despite having one of the highest incidences of this particular brand of horror.

It all makes one wonder if the golden sun will continue to shine here for years to come, or rainclouds are forming.

Dispatch #2 – Across the Gate of Gold

The SF Bay Area is of course much more than just a center of technology innovation and startups. It’s home to some of the nation’s largest banks, most creative artists and giants of literature, some of the world’s most innovative chefs, … and then there is the wine. We set the compass north and head across the Golden Gate, up through the Marin headlands and past the Sonoma frontier, then point east and into the mecca of American wine: Napa Valley. 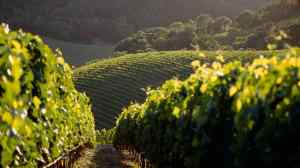 The wine industry commands an emotional center of San Francisco history. The Italians, Germans, and French all journeyed here in the late 1800s, impressed by its rocky rich soil and moderate climate that rivalled any region in the old world for making fantastic vino, wein, du vin (mon dieu c’est bon!). The Valley covers about 42 thousand acres and hosts 450 immoral havens of the fermented grape, the wineries. The biggest names in industry have their roots in this valley: the Mondavis and Krugs; the Beaulieu and Montelena families.

None were greater than the house that Jacob and Frederick Beringer built, established in 1864 and considered the oldest continuously operating winery in the Napa Valley. It is here that our best efforts at sobriety for an afternoon end, led through a private tour and then generous tasting of the really good stuff by a great friend and shameless corrupter, Hubert. After leading us through the nuances of Beringer’s top flight reds, and they were top, we sobered up over Champagne at the ranch of my old pal Chris, followed by dinner and more amazing cabernet at the All Seasons Bistro in sleepy Calistoga. (Yet another great meal.) I slept well.

Addendum: We had braised gently in piping hot, smoothy thick tubs of stinky brown mud, then had our baby pink bodies cleansed and bubbled in artisanal spring water baths, cool cloths over our beading foreheads. The final act at the Roman Spa in Calistoga was a relaxing one-hour massage with lavendar oil, and truth be told I may have snoozed through a bit of that. This early afternoon pampering had been our prep for the wine immersion at Beringer and I’ll offer as my excuse for the wobbly performance by evening’s end. It’s my story, I’m sticking to it.

How hard can it be to find a great slice of cheesecake in San Francisco? It’s pretty damn hard I’m here to attest, and that’s a reflection of how this town has changed. Apparently the nouveau rich of SF don’t stoop to that pedestrian dessert level.

Cheesecake is one American recipe that the French enjoy. They don’t try to hide its origin or claim some adaption as their own. They list it as cheesecake américaine when offered, not gateau au fromage. Attempts at it – mostly mediocre – are not uncommon on bistro menus across the hexagon, and I have been tasked with finding the real American deal while here in the magic kingdom. “Not to worry,” I’ve assured my traveling companion, cheesecake is as American as apple pie. Try finding that too.

There are a lot of innovative, delicious desserts on the menus throughout San Francisco. Nopa, for example, offers cream cheese doughnuts and huckleberry buttermilk panna cotta as 2 options. The doughnuts ingredients: shinko pear butter, nocino raisins, cinnamon honey syrup and fried walnuts. And for the panna cotta: white chocolate labne, puffed grains, cacao nib and candied meyer lemon. We loved our meal there and the desserts were indeed scrumptious, and it’s great to have this kind of creative gastronomy across the city. But some nights I just want a simple (and cheap) scoop of ice cream or slice of cheesecake; something with ingredients I can pronounce and afford. Honestly, I don’t know my shinko from my nocino, but I do love how they fall off the tongue.

Does Bar Crudo serve cheesecake? No. Does Cafe Claude or the Bean Bag Cafe or Mario’s or Napa Valley Burger in Sausalito or the 2 to 3 dozen places I tucked my head into and asked, “Hey, do you guys have cheesecake?”? No. My promises of a quick cheesecake fix were starting to sound hollow, my reputation as an expert SF guide tarnished.

San Francisco has become a thrilling playground and gastro destination for the newly minted techno-rich who don’t blink at paying $3 for a cup of Indonesian bean drip coffee each morning, or $50+ per night on a Nopa dinner capped with huckleberry buttermilk panna cotta, or $60 on 12 pieces of nigiri at Tsunami Sushi across the street. Are they worth it? Your call, but that’s not the point. For the rest of us seeking more humble options that won’t break the bank, like cheesecake, the availability is getting thin. It’s been encouraging to walk along Divisadero street each night this week and see the bars and restaurants humming, people paying, the local economy hitting on all cylinders. But something is being lost in the excess. It’s called diversity, and San Francisco doesn’t want to lose that part of it’s amazing charm and distinction.

Did we ultimately find our cheesecake? Yes, by paying a visit to Zanze’s in the outer reaches of the city’s southwest corner; the fogbelt along Ocean Avenue. Sam Zanze has been making one thing and one thing only here for the past 30 years: cheesecake. And any SF foodie worth their toque will tell you it’s the best in the world, … not only in this city. We would have to agree: light, fluffy, divine. Assignment completed and my reputation salvaged for the moment.