I love that my partner believes in past lives and future premonitions. She buys gemstones of various colors and shapes – agate and garnet and bloodstone – some for protection, some for energy, others for healing. The spiritual resonance of vintage jewelry and clothing can overwhelm her emotional antennae; the histories of ownership, the echoes of lives and loves. Phases of the moon and astral alignments can swing her moods and appetites. This embrace of mysticism is just a small part of her beautiful complexity, and often leaves me both baffled and enlightened.

I studied physics and worked in finance. I’m the son of a no-nonsense country doctor and was taught to believe in logic and the observable, in the need for empirical evidence, the credibility of proofs and statistical significance, and to call bullshit on bullshit. Grounded, predictable.

Do I share my partner’s faith in a world beyond our world? Does that matter? No, it doesn’t matter. What matters is respect.

I respect beliefs of all stripe and persuasion and allow that someone, most anyone actually, may have a better handle on the bewildering mysteries of life than me. I accept that emotional states like heartbreak and love may inexplicably induce or remedy our physical ailments, and wonder openly if universes parallel to our own might be humming along at this very moment, shifted in time and frequency. With the greatest admiration for the principals of solid science and Neil Degrasse Tyson, I respect that not all cause and effect can be proven through scientific method (although that’s a great starting point).

Respect for the beliefs and priorities of others is not a virtue promoted widely across the globe these days, particularly by our political leadership. There has been a decidedly my-way-or-the-highway approach to governing and diplomacy since George W. declared in 2001, “Every nation, in every region, now has a decision to make. Either you are with us, or you are with the terrorists.”

This type of narrow, self-centered bluster, which proved highly effective at rousing patriotic fervor (and voter support), has been co-opted by every aspiring strongman worth his or her spittle: Putin, Jong un, Trump, and Le Pen are just four headliners making the most racket at the moment. National mandates are paramount, compromise shows weakness, and those with opposing views are twittered as morons, frauds, and liars. Respect for opposing opinions? That’s for losers.

Now here I sit, a loser with his pint of beer at Le Grand Café in downtown Fontainebleau, a beautiful French city (aren’t they all?) just an hour southeast of Paris. Macron’s win last week is the topic on everyone’s tongue. I’m guessing he was widely supported in this upper class enclave, home to the regal Fontainebleau Chateau where Henry IV (the very coolest of French kings), Napoleon, and various Louis entertained in the gardens, hunted in the forest, and generally carried on with the local beauties. 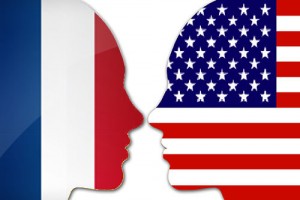 The election outcome reflects to me a story of 2 conflicting global movements, the first based on hope despite the very real risks, the second based on fear in light of the many challenges. France has emerged as the best example of #1, showing again that it cuts its own stubborn path. Liberté, égalité, fraternité: these are uneasy times to honor such honorable principles. The US is the best case study for #2. Give me your tired, your poor, your huddled masses yearning to breathe free, the wretched refuse of your teeming shore. This is another tough invitation to honor for a nation terrified by the bad hombres under the bed.

It surprises me. The The Home of the Brave has been so quick to surrender its principals and self-respect to the threat of terror, despite having almost no instances of domestic terror in the past 15 years. Respect for the hopes and dreams of others, … the American DREAMers for example? Désolé. Look at the man they’ve elected. Meanwhile their Surrender Monkey counterparts have hung tough and shown real bravery, despite suffering the highest incidence of Allah Akbar-screaming lunatics spraying their cafés and clubs with deadly fire. You think life is dangerous in Paris, think of the genocide in Aleppo. Come, come. Look at the man they’ve elected.

It surprises me. At this moment of global upheaval both countries have placed their bets on mavericks with no political experience. The similarities end there. One married a schoolteacher 25 years his wise senior; the other a model 24 years his long-legged junior. (I give her big points for avoiding the White House these days, however. She’s growing on me.) On election eve one spoke of hope, humility, and the imperative of a proud country to coalesce around ambitions for a brighter future and respect for all cultures, creeds, and religions. The other spoke in dark tones of enemies at the gate, a country in crisis, and himself as the single sole savior able to counter the nation’s impending doom. Who deserves your respect?