Suggested Song: Giving it all Away, The Frames
Suggested Drink: Cherry Coke (rumored to be Warren Buffet’s favorite tipple)

A 1% club sounds elite. The egoist within would rather be part of an exclusive 1% than the common 99% in most cases, but in fact this term has a acquired a pejorative distinction of late, tainting those in its ranks with an Antoinettian hue. It’s unfair in the main but not surprising when certain amongst the club, typically the 1% of the 1% can’t resist their own let them eat cake tantrums. To wit, Tom Perkins, Silicon Valley titan and former tech tycoon, made a well-documented stink earlier this year when his opinion piece in the Wall Street Journal likened the assault on America’s wealthy to Kristallnacht. He has since admitted regrets for the insensitive comparison, but burnished his credentials again as a delegate for the 1%’s oblivious wing when fielding questions at a Q&A in San Francisco, starting out that his bejewelled watch could buy “a six-pack of Rolexes” (just to get his pedestal firmly planted). He followed up with criticisms of President Johnson’s War on Poverty and a claim that “if American gun laws had been in place in Germany, Hitler never would have risen to power.” Amen to life in an echo chamber.

That the aspiring term “the 1%” has been hijacked and vilified seems unfair. Unfortunately, those who suffer most from its negative subtext are often too reverent to their oblivious brethren doing it harm. It falls to the rest of us then to reclaim the term, to again make it cool to be elite. So here is your chance to join the club regardless of income or level of affluence: pledge to leave this holy earth with no more than 1% of your accumulated wealth still intact, the rest committed to causes benefiting the masses large or small, local or global, whatever your social passion de jour. What, you ask, are you crazy?! Consider these 4 benefits:

How you decide to build a legacy program with your 99% is of course a personal decision based on values, passions and available resources. Bill and Melinda Gates focus on resolving the grand challenges of “extreme poverty and poor health in developing countries, and the failures of America’s education system” through their foundation. I’ve chosen the nonprofit TechnoServe for all the proceeds of my first book, impressed by its mission (business solutions to poverty), high rating by Charity Navigator, and personal connection (through student volunteers from INSEAD). And again, the capital we invest need not be financial to be impactful. Habitat for Humanity and Ronald McDonald House are just 2 of the thousands of organisations that do inspiring work and provide opportunities for engagement that extend beyond donations. Friends and family in my personal sphere volunteer time and elbow grease – their most precious forms of capital – for both.

Ready to join the club, to re-elevate the 1% distinction from its stigmatic standing? Share your stories here for we are all looking for testimonials and inspiration. I’ll be happy to post them. 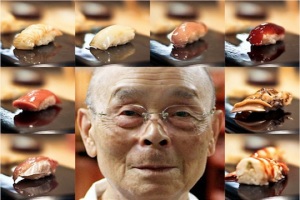 On a completely different topic, for those of you seeking an example of passion and purpose in one’s life watch Jiro Dreams of Sushi, a 2009 documentary about Jiro Ono, considered by many (including Joel Robuchon, Anthony Bourdain, and the Michelin star committee) as the greatest sushi chef on the planet. His unassuming restaurant – the 10 seat Sukiyabashi Jiro located in Tokyo’s Ginza subway station – books out months in advance and is a study in the pursuit of simple perfection. At 88 years of age the chef provides a fascinating portrait of uncompromising commitment to his craft, humility, an endless search for excellence, and deep passion. Looking and carrying himself as a man 20 years his junior, Chef Jiro and his story reinforce Victor Frankl’s assertion that purpose is what keeps us alive, engaged and full of zest. For the trailer on Jiro Dreams of Sushi click here.