We owe a great debt to Miley Cyrus and her MTV Video Music Award antics for revealing just how empty and irrelevant the music side of popular rock music has become. Talented artists still record quality songs, but they rarely get mainstream attention and no longer define a generation, at least through the poetry and power of their music. 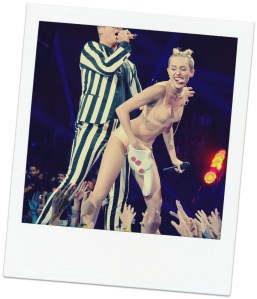 In pop music’s creative heyday – the 1960s through 1980s – Cyrus would have been a novelty act struggling a few rungs below Charo, who also found fame with sexy impishness but at least could sing well (without auto-tuning) and played a mean flamenco guitar. Imagine a music awards ceremony today with the strong fem bench of the past: Janis Joplin, Diana Ross, Linda Rondstadt or Tina Turner (add your favorite) still in top creative form. That the 2013 VMA organizers hand the prime time slot to a girl whose greatest talent is butt twerking and tongue hanging cements any suspicions that rock has reached a creative dead end. Any stripper worth her string must have been asking, what the hell was that?

That great journey from Presley through Petty and Prince has been marked by a number of momentous creative pivots starting with rock’s foundations in the mid-1950s (Berry, Richard), bleached clean for popular consumption (Presley, Holly); the infectious pop harmonies of the British Invasion (Beatles, Kinks) and echo answer from the Pacific coast (Beach Boys, Doors); the folk revival plugged in (Dylan, Young); the heavy hand of hard rock in its endless variations (Zeppelin, Cooper, Metallica); the heavily stylized rock operas (Who, Pink Floyd) and immediate fury of punk (Reed, Iggy, Ramones); the floating rhythms and all night party themes of disco (Bee Gees, Summers); and rap and a return of music to the street poets (Tupac, Jay-Z, Eminem).

Before MTV we first heard the music and then saw the band, or if we were lucky watched them on Ed Sullivan or Don Kirchner’s Rock Concert at midnight. Looks and style, while necessary, were always secondary to talent. The Monkees will always be a goofy TV show, not a legitimate rock band. Can you remember the first time you heard list A: Hard Day’s Night, Stairway to Heaven, Hotel California, Bohemian Rhapsody, Highway to Hell (for you metal heads), or Staying Alive? You didn’t dwell on what the musicians looked like, you were simply absorbed in the sound. Am I right? Now consider some of the biggest hits since 2000, list B: Hips Don’t Lie, My Humps, Toxic, Baby, or Born This Way. Which list is still relevant in 20 years? Can you even name the B list artists now?

Musical shifts over the past 20 years have been less momentous, more incremental. Most of been mélanges of pre-existing forms, 3 parts this with 2 parts that, creative possibly but not disruptive. Rap samples rock, electro infuses disco. If we compare the arc of first-half 20th century art with second-half 20th century music, we’ve become bogged down with Jeff Koons and his Hoover vacuums after an extraordinary sweep from the Impressionists through Cubism, Expressionism, and Surrealism. Sigh.

In the glory years each teen regiment, perhaps two to a decade, had their defining sound and iconic musical deities. My brother had Neil Young and Led Zeppelin, and 5 years later I had Bruce Springsteen and Alice Cooper. There are no analogs today, no artists releasing a series of albums and singles over multiple years on which to discuss and debate for hours on end and build loyalty. Great talent still surfaces from time to time, but the iPod has single-handedly destroyed the album and the internet has democratized the music scene. Now anyone, even your blogger, can record an album on their laptop and self-release on iTunes. It expands the playing field but makes it impossible for even the best to build a critical mass of rabid followers. My guess? Over the next 20 years concerts headlined by single mega-acts will be mostly displaced by multi-stage festivals featuring 20-30 independent artists. This is okay, but the throne of rock royalty has been splintered in the process. Now everyone is just a court jester.