There is no place like home. The word alone induces feelings most warm and sentimental, particularly of the family homes in which we were raised. If you attended summer camps as a kid then you may remember the rush of seeing your parents’ car glide into the dusty parking lot on the last day of fun. Pure joy; I’m going home! It’s where we feel secure and peaceful; that sheltered haven from life’s little tempests.

Facebook introduced a new mobile app last month called Home. Its core innovation is in flipping Facebook from an outbound, manual experience – you decide when to touch your digital community, to open the app and what to read – to an inbound, automatic one – all posts are forwarded to your mobile device’s new Facebook-engineered home screen without any manual activation on your part. In introducing Home, Mark Zuckerberg stated that “Instead of having to click on the Facebook app, Facebook will be integrated into everything you do.” A company post added that it is “a window into what’s happening with your friends – friends finishing a bike race, your family sharing a meal or an article about your favorite sports team.” Such a joy. 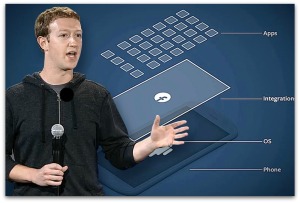 On an aside, it seems that all techy CEOs have now taken a page from the Steve Jobs playbook that reads, once per year awe your rapt believers dressed in something “I don’t give a shit” cool and monastically basic (black faux turtlenecks and casual hoodies with jeans works well) like Moses descending from the mount, coming to share the messiah’s holy message of a new feature that will profoundly elevate the quality of their trivial lives to a higher plane of unimaginable digital rapture. “And get this, in addition to the new GPS, accelerometer and 3-axis gyroscope, this iPhone can actually talk to you!“.

So, back to Home. Imagine your friends and their friends (and their friends through association) pinging you 86,400 seconds a day, 365 days a year with burning updates of a family dog’s demise, dinners at the Olive Garden, drinks being shared (thought you’d LOVE to know, burrrrp!), photos of parents from 40 years back, the niece of someone’s second cousin having her broken her finger splinted (isn’t she just a trooper?), articles just read, pop songs just heard, phone pics of Pocatello through the airplane window, and all other sorts of mostly inane experiences and opinions about which you may but most likely will not have the slightest curiosity.

It gets scarier. A recent article by Om Malik (click hear to read) highlights that Home knows what apps you use and how often; where you are right now (thanks to that nifty GPS) and where you live, shop, dine, and drink; if you’re on the move and whether by foot, bike, or driving (thanks to that nifty accelerometer). It’s clear why Facebook wants this information (and will likely be selling it aggressively), as advertising fees fuel the dot com industry. It’s less clear what users gain beyond the constant hassle of a phone that won’t stop chirping. 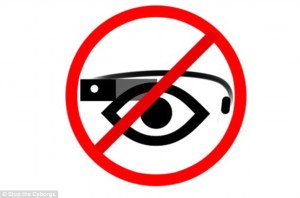 So what is next? How about the cross-pollination of Home with Google Glass, a new glasses technology that extends the computer screen evolution from desktop to laptop to phone and now to your spectacles? Facebook status updates and “chat heads” will flash before your eyes without the need to even dig the mobile out of your purse or pocket. Google Glass is more than just a bit frightening from the privacy perspective as well; they will be equipped with a camera for photos and video. In this era of constant connectivity and immediate image dissemination, imagine the comfort of being seated near a pair of these at your next bachelor(ette) party, beach outing, or dinner date (was that her spouse?). Bans are already popping up in numerous bars and cafes. In addressing complaints about Google’s privacy intrusions in 2009, then CEO Eric Schmidt retorted that “If you have something that you don’t want anyone to know, maybe you shouldn’t be doing it in the first place.” This from the company who’s original motto was “Don’t be evil.”

For an antidote to this always-on digital tsunami I can recommend Crafting Calm, Projects and Practices for Creativity and Contemplation by Maggie Oman Shannon and Mary Anne Radmacher. Shannon – a San Francisco–based interfaith minister – introduces the reader to 40 or more unplugged activities designed to bring a sense of calm, quiet, and mindfulness when the digital assault gets overwhelming. I’ve written before of the value of crafts and rituals in their tether to home (the real home) and family, binding us to the core unit and a historical story. Students are assigned crafts to complete in my Intérprize Workshops. Rituals and crafts of the unplugged variety – and these are the most meaningful – offer pause from the tidal surge of the digital wave, that endless inundation of chats, texts, updates, calls, emails, and general web browsing that calls to us when bored. They make our homes more than just a place to plug in and click on.

Postscript: The Last Sunrise is a documentary about the Danzantes Concheros of Mexico, an indigenous group whose fascinating traditions around the mysteries of death bring greater meaning to life and an urgency to experience it deeply now. This beautiful project is currently being produced in Mexico by friends and raising money through a crowdfunding approach. More information is available here.