I bought tarot cards while in San Francisco recently. It was an undisciplined move for this disciple of science, but not an impulse buy. I was feeling blocked and sought a shift beyond the unusual to break through. The esoteric arts seemed just crazy enough, and the tarot was an option high on the wackiness scale. I found cards in the Haight (naturally), studied a few books over coffees or beer, started laying out simple readings at the kitchen table, and became enchanted. Here’s why.

I’m not naturally drawn to the mystical arts. I pursued physics in college and studied the theories of giants like Foucault, Einstein, and Bohr. I believe in the scientific method: imagination, observation, and verification built on empirical evidence. Yeah that sounds reasonable, now prove it.

Science does a pretty good job of explaining how things behave; tiny things like quirks and massive things like black holes. The arc of an arrow or locus of a sub-atomic particle? We got that, even when said particle is (almost mystically) in 2 places at once.

What do we do with this knowledge? A lot of good things and a few unimaginably horrible things that counter all best intentions. We heat the winters and cool the summers and tame nature at home while venturing beyond our garden of eden to uninhabitable worlds. We put men on a barren grey moon while burning our own  blue paradise to a crisp. We develop an unlimited source of renewable energy and then commit its stockpiles to assuring our own mutual destruction.

So the breathtaking sweep of scientific evolution, from the earliest mathematical foundations of Babylon and Maya to their extrapolations for modelling motion and mass by Newton and Galileo, and through Einstein’s impossibly elegant mathematical reduction that relates that mass to energy through the inviolable speed of light (in a vacuum) has led us to this: perhaps two generations remain before the planet is reduced to a bleached cliff notes version of its former verdant splendor, or we blow ourselves to smithereens first.

So what is science worth if through its application we ominously degrade the quality of our existence or threaten that very existence itself? It’s a question worth considering.

Science: an astounding, evolving compendium of knowledge fundamental to making sense of the many mystifying dimensions of the world micro to massive: physical, chemical, and biological. As for providing the common sense and tools needed to harness this knowledge for the greatest benefit of everyone? Not so good. Some people lose their faith in the preeminence of religion. I’ve lost my faith in the primacy of science.

Unlike science, the mystic arts provide zero utility in understanding the physical world beyond; whether just beyond our touch or light years beyond our sight. They provide an interesting option to understanding the world within, however. Useless at explaining how things behave, but effective (for the open minded) for reflecting on why we behave in the crazy ways we do. And if we hold a clearer lens into our own behavior, perhaps we make better decisions about that behavior. 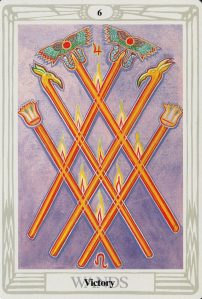 A stack of colorful cards is nothing more than that. In a vacuum (again with the vacuum) they offer no particular value beyond the pleasure of a game. But equipped with a good guide book, a glass of decent wine, and the help of a friendly ghost (now this is key for me) that stack of 78 cards comes alive in its many dimensions and possibilities.

The true power of the tarot is in its various facets and options for interpretation. Imagine gazing through a magic kaleidoscope that could clarify your past and foretell the future. Twisting the tube sent the many colors of varying shapes and dimensions into unpredictable spins; each shade, size, and trajectory open to interpretation. Now here’s the magic: that interpretation is unique to each viewer. There is no rigid set of scientific guidelines for analysis. Yes, there is a system to the tarot, but what you draw from the colors and spins will be different than what I draw, because our histories and expectations, and the burning questions in our lives are all wildly different.

Kings and queens, princesses and princes, knights and swords and cups and disks and wands, blues and reds and yellows and greys, fire and water, and then throw in the planets. These are just a few of the kaleidoscopic elements of the tarot that drive the meaning of the cards.

I have my own belief system and hope that you do too, … one that offers comfort and solid footing. I’ve mentioned in an earlier essay that I light a candle each evening for my sister and she is present in the moment. I fill her in on my day and invite Cathy to guide the cards that I select and lay out each evening. She has joined the conversation and I (want to) believe is giving the readings a mystical bump here and ethereal tug there, and from her side of the spiritual divide bringing order to the cards I’ve randomly pulled from the deck. If true then I’ve tapped into something powerful, and if not true than I’m just connecting with someone I miss and love. Either way it provides a fun system for pondering decisions about what’s around the corner; immediate or longer term.

Some believe that Jesus healed the blind and others that Moses parted the sea. Maybe Mohammad did split the moon and one particle can exist in two places at the same time. I believe that my sister cuts the cards. We choose our miracles. I’m good with mine. What are yours?