Joan Baez performed at the Olympia in Paris last week on a stop through her final tour. Her voice was dynamic as ever, and touch with the guitar fluid and delicate. I went to the show thinking, “okay, she’s a legend so why not?” What I enjoyed was a concert of surprising grace and emotion, Baez introducing each song in

flawless French, the audience reverent and hanging on every word and note. When she played Diamonds and Rust, her heartbroken dig at Dylan, it got me thinking about that particular ghost in her life; the ghosts we all suffer.

Our lives are inhabited by the otherworldly. They are spurred from memories to comfort or vex. Angels glide in when invited; our ghosts slip away only when ready.

Do they exist? They very much exist for those who very much believe. You can accept or deny their presence in your life, but cannot question this fundamental principal: we create our own realities, those versions of who we were and how we were loved, and the laws of the universe that govern our future. Did Dylan love Baez? I suspect that she was convinced yes in the early days, then a time she suspected no longer, and perhaps later doubted everything. So reality is conveniently pliant and the truth selective. Diamonds and Rust provides some hints to Baez’s own take.

It’s January in Paris and you are freezing.
I see you framed in a soft falling snow and feel warm.
How’s the weather?

I’ve started lighting a candle for my sister every evening. She’s with me instantly, glowing against the wax and flickering along the wick. She sits with me at the piano and I ask her advice over dinner. Cathy lifts my mood and lowers my tensions, like she always has. She calms and encourages, so she is real, as evident as my fingers on the keys, floating in on angel wings. And at the end of the night, when I blow out the candle, she lifts away on the last glimmer of flame until I call again. 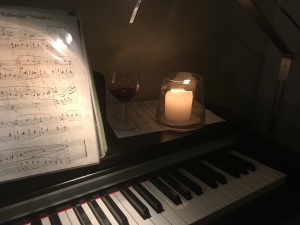 Sometimes we confuse angels from ghosts. We doubt our memories and question emotions. We visit old haunts to call new spirits, we light candles and recite poems in the hopes of conjuring the angels of old. Sometimes they come. Other times we find nothing but phantoms and smoke.

Chambre 35 at the Hotel Emile, with its clawfoot baignoire and 3rd floor view down Rue du Roi de Sicile, is haunted. Not-yet-lovers soak in the steamy bath with rose petals and champagne. They tease and tempt and soap each other toes. He’s never seen a woman so enchanting, no moment so inviting, as her and now. Ever. He’ll do nothing to risk the spell, just lay back submerged in this sudsy bliss until she slowly floats over him, plants her kiss and smiles, “ce maintenant le lit, non?”

Have you been in moments like this, completely surrendered to the dream and memory? But when your eyes open you are alone. You had called an angel but conjured a ghost. The image dissipates like smoke from a blown out match and you wonder what was real, ever. Diamonds and rust Joan, just diamonds and rust.