It would be a fine time to visit Beirut. With temperatures hovering in the high 70°s and nothing but blue skies in the forecast, 5 perfect days to explore this battered beauty. Lebanese discontent was blowing warm in the days before our arrival, but the street rallies calling for a new government were being lauded for their peace & love vibe. And then we touched down.

Microclimates in an Unstable City

My old hometown of San Francisco is a city of microclimates. It can be tanning weather – all sunshine and Coppertone – at Dolores Park and on the same afternoon a blanket of chilly wet fog crawling off the sea and over the Sunset District. Beirut was marked by microclimates this past week too, but as a measure of volatility, not weather.

There are neighborhoods to enjoy and those to avoid in a city on the edge; a city confused about its intentions, undecided about its methods, and uncertain about the opposition. For 4,000 years the Lebanese and their beautiful country have been pushed around and exploited by the latest jackboot in the neighborhood: the Romans and Persians, the Arabs and Turks and Crusaders, the French and Israelis and Iranians. They’ve had the shits of it and the corruption manifest by this outside influence. To the barricades they have come, incredibly diverse but rallying together.

Circles were drawn in sharpie on our hotel map of the city. News updates on street clashes that afternoon were not reassuring and the concierge was agitated with my need for a leg stretch after the 5-hour flight from Marseille, but if Monsieur Magill insisted on exploring le quartier, then he felt a responsibility to at least steer me clear of the hot zones. He hemmed me into a tight periphery of about 4 blocks to the west and south, and insisted that I not take a left when exiting their garden courtyard. Non monsieur, pas une bonne idée de toute! His face was tight and I accepted that he was not being over protective. I walked through the leafy hotel entrance and turned right.

Most shops pull their shutters in times of upheaval and our local neighborhood felt locked down. Not surprising then that the mall I was seeking out was closed for the day. This I was told by a young woman from whom I had asked directions on the street, but yes she could get me pointed towards a place with good Lebanese beer, which, if I am being honest, was the intention from the moment my Toms hit the crumbled Beirut sidewalk.

The blocks that followed led me out of the sharpie circle of safety, but my guide felt assured that all would be cool in this part of town on this particular afternoon, and it was. I found my spot – La Ménagerie – and some fascinating conversation, because, well who doesn’t want to have a drink and share their particular episode of events with others also passing through a common catastrophe: the roll and shakes of a violent earthquake, for example, or the unnerving sense of doom when watching big planes fly into tall buildings.

On this day in this city it was the disintegration of a government – we watched the prime minister announce his resignation on TV that afternoon – and tensions swelling between the ever-pressing street demonstrators, heavily-armed Lebanese soldiers attempting crowd control, and Hezbollah militias on the prowl for outside agitators: zionists, CIA, whomever. 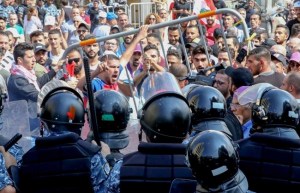 The climate downtown that day was hot and anxious, just past the army’s checkpoint a few blocks over. The climate by La Ménagerie was relaxed and convivial, everyone talking about what had came before and what needed to come next. While our neighbhorhood remained an oasis of calm, downtown saw its share of shattered storefronts, intimidating nightsticks, and confrontational graffiti:

Given the powder keg of shifting agendas it was a tribute to all involved – the protestors, the government, its military, and the militias – that the situation remained nonviolent for the most part. A lot of venting, corralling, and jockeying for control, but no descent into anarchy. My weeklong love affair with Beirut had begun and still lingers, now back in Aix. Good beer, great people, and bearing witness to a defining moment in their history. I will be back.